Donald Trump and the White House Coronavirus Task Force holds a news conference: Even with everything we know about the guy, the moment was still chilling.

Over the past three years, many terms have been thrown around to describe Donald Trump. Phrases like “huge moron,” “colossal jerk,” “massive prick,” and, our personal favorite, “malignant tumor.” Obviously many have agreed that the 45th president of the United States is both a terrible person and an idiot incapable of tweeting a coherent sentence, let alone running the country. Still, some have worried it would be taking things too far to diagnose the man as a full-blown sociopath. Are we being too cavalier with the designation, they’ve likely fretted. Shouldn’t we wait until the Mar-a-Lago groundskeepers find a few dozen heads in the basement, they’ve probably wondered. On Friday, however, Trump confirmed for all the world to see that he indeed has no conscience.

During a press conference at the White House, NBC reporter Peter Alexander asked Trump, “What do you say to the Americans who are scared, though? Nearly 200 dead, 14,000 who are sick, millions, as you’ve witnessed, who are scared right now. What do you say to Americans who are watching you right now who are scared?” In reality this was a softball question that anyone with a semblance of a soul would be able to answer, responding with something like, “That’s an understandable feeling. I would tell them we’re in this together and we’re doing everything we can, as fast as we can.” But Trump literally only thinks about himself, so instead he told Alexander: “I say that you’re a terrible reporter. That’s what I say. I think it’s a very nasty question, and I think it’s a very bad signal that you’re putting out to the American people. The American people are looking for answers and they’re looking for hope, and you’re doing sensationalism and the same with NBC and con-cast. I don’t call it Comcast, I call it ‘con-cast.’ Let me just tell you something. That’s really bad reporting, and you ought to get back to reporting instead of sensationalism.” Seemingly responding to criticism that he’d irresponsibly hyped the drug chloroquine as a treatment for COVID-19, despite the fact that it hasn’t yet been approved by the FDA for the virus, Trump snarled, “Let’s see if it works. It might and it might not. I happen to feel good about it, but who knows. I’ve been right a lot.”

Peter Alexander was trying to get the president of the United States to address the fears Americans have about #coronavirus. His attack on Peter is absolutely shameful  and hard to watch -- but realize that he attacked Peter so he could avoid answering to you. 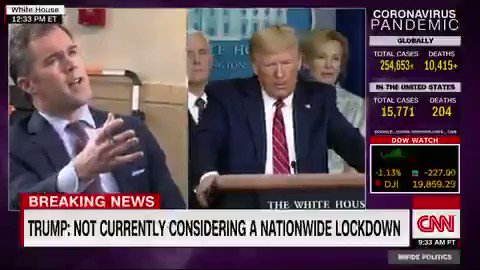 As many have noted, employees at NBC, where Alexander works, lost a colleague to the virus today, but obviously it shouldn’t take such an event for the president to muster up or even fake some empathy for people who are terrified about a fast-moving pandemic. Later, given the opportunity to prove to the American people that he’s not a total monster, Trump declined: