WASHINGTON (AP) — Joe Biden was sworn in as the 46th president of the United States on Wednesday, declaring that “democracy has prevailed” and summoning American resilience and unity to confront the deeply divided nation’s historic confluence of crises.

Denouncing a national “uncivil war,” Biden took the oath at a U.S. Capitol that had been battered by an insurrectionist siege just two weeks earlier. Then, taking his place in the White House Oval Office, he plunged into a stack of executive actions that began to undo the heart of his polarizing predecessor ’s agenda on matters from the deadly pandemic to climate change.

At the Capitol, with America’s tradition of peaceful transfers of power never appearing more fragile, the ceremony unfolded within a circle of security forces evocative of a war zone and devoid of crowds because of the coronavirus pandemic.

Instead, Biden gazed out on a cold Washington morning dotted with snow flurries to see over 200,000 American flags planted on the National Mall to symbolize those who could not attend in person.

History was made at his side, as Kamala Harris became the first woman to be vice president. The former U.S. senator from California is also the first Black person and the first person of South Asian descent elected to the vice presidency and the highest-ranking woman ever to serve in the U.S. government.

Biden never mentioned his predecessor, who defied tradition and left town ahead of the ceremony, but his speech was an implicit rebuke of Donald Trump. The new president denounced “lies told for power and for profit” and was blunt about the challenges ahead.

Central among them: the surging virus that has claimed more than 400,000 lives in the United States, as well as economic strains and a national reckoning over race.

“We have much to do in this winter of peril, and significant possibilities. Much to repair, much to restore, much to heal, much to build and much to gain,” Biden said. “Few people in our nation’s history have been more challenged, or found a time more challenging or difficult than the time we’re in now.”

Biden was eager to go big early, with an ambitious first 100 days including a push to speed up the distribution of COVID-19 vaccinations to anxious Americans and pass a $1.9 trillion economic relief package. It included a blitz of executive orders on matters that don’t require congressional approval — a mix of substantive and symbolic steps to unwind the Trump years. His actions included re-entry into the Paris Climate Accords and a mandate for wearing masks on federal property.

“There’s no time to start like today,” a masked Biden said. in the Oval Office. Then he swore in hundreds of aides — virtually — telling them, “You’re my possibilities.”

The absence of Biden’s predecessor from the inaugural ceremony underscored the national rift to be healed.

But a bipartisan trio of former presidents — Bill Clinton, George W. Bush and Barack Obama — were there to witness the transfer of power. Trump, awaiting his second impeachment trial, was at his Florida resort by the time the swearing-in took place.

Biden, in his third run for the presidency, staked his candidacy less on any distinctive political ideology than on galvanizing a broad coalition of voters around the notion that Trump posed an existential threat to American democracy. Four years after Trump’s “American Carnage” speech painted a dark portrait of national decay, Biden warned that the fabric of the nation’s democracy was tearing but could be repaired.

“I know the forces that divide us are deep and they are real. But I also know they are not new. Our history has been a constant struggle between the American ideal that we are all created equal and the harsh, ugly reality that racism, nativism, fear, demonization have long torn us apart,” Biden said. “This is our historic moment of crisis and challenge, and unity is the path forward and we must meet this moment as the United States of America.”

Swearing the oath with his hand on a five-inch-thick Bible that has been in his family for 128 years, Biden came to office with a well of empathy and resolve born by personal tragedy as well as a depth of experience forged from more than four decades in Washington. At age 78, he is the oldest president inaugurated.

Both he, Harris and their spouses walked the last short part of the route to the White House after an abridged parade. Biden then strode into the Oval Office, a room he knew well as vice president, for the first time as commander in chief. 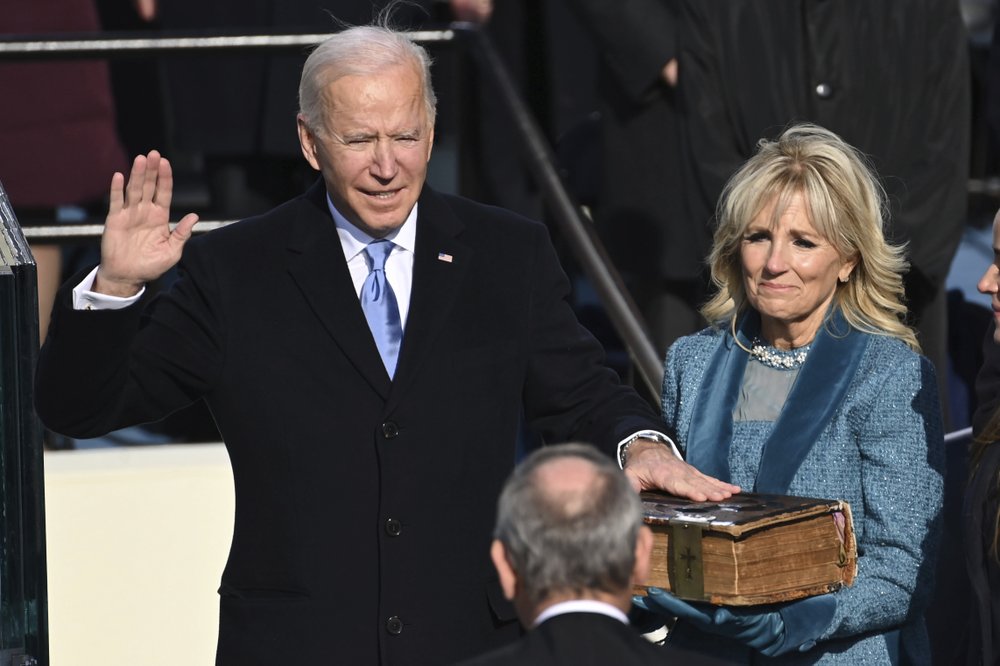 Joe Biden is sworn in as the 46th president of the United States by Chief Justice John Roberts as Jill Biden holds the Bible at the U.S. Capitol Wednesday.(Saul Loeb/Pool Photo via AP)

At the Capitol earlier, Biden, like all those in attendance, wore a face mask except when speaking. Tens of thousands of National Guard troops were on the streets to provide security precisely two weeks after a violent mob of Trump supporters, incited by the Republican president, stormed the building in an attempt to prevent the certification of Biden’s victory.

“Here we stand, just days after a riotous mob thought they could use violence to silence the will of the people,” Biden said. “To stop the work of our democracy. To drive us from this sacred ground. It did not happen. It will never happen. Not today, not tomorrow. Not ever. Not ever.”

The tense atmosphere evoked the 1861 inauguration of Abraham Lincoln, who was secretly transported to Washington to avoid assassins on the eve of the Civil War, or Franklin Roosevelt’s inaugural in 1945, when he opted for a small, secure ceremony at the White House in the waning months of World War II.

But Washington, all but deserted downtown and in its federal areas, was quiet. And calm also prevailed outside heavily fortified state Capitol buildings across nation after the FBI had warned of the possibility for armed demonstrations leading up to the inauguration.

The day began with a reach across the political aisle after four years of bitter partisan battles under Trump. At Biden’s invitation, congressional leaders from both parties bowed their heads in prayer in the socially distanced service a few blocks from the White House.

Biden was sworn in by Chief Justice John Roberts; Harris by Justice Sonia Sotomayor, the first Latina member of the Supreme Court. Vice President Mike Pence, standing in for Trump, sat nearby as Lady Gaga, holding a golden microphone, sang the National Anthem accompanied by the U.S. Marine Corps band.

When Pence, in a last act of the outgoing administration, left the Capitol, he walked through a door with badly cracked glass from the riot two weeks ago. Later, Biden, Harris and their spouses were joined by the former presidents to lay a wreath at the Tomb of the Unknown Soldier at Arlington National Ceremony.

By afternoon, a White House desolate in Trump’s waning days, sprang back to life, with Biden staffers settling in and new COVID-19 safety measures, like plastic shields on desks, in place.

In the evening, in lieu of the traditional balls that welcome a new president to Washington, Biden was to take part in a televised concert that also marked the return of A-list celebrities to the White House orbit after they largely eschewed Trump. Among those in the lineup: Bruce Springsteen, Justin Timberlake and Lin-Manuel Miranda.

This was not an inauguration for the crowds. But Americans in the capital city nonetheless brought their hopes to the moment. 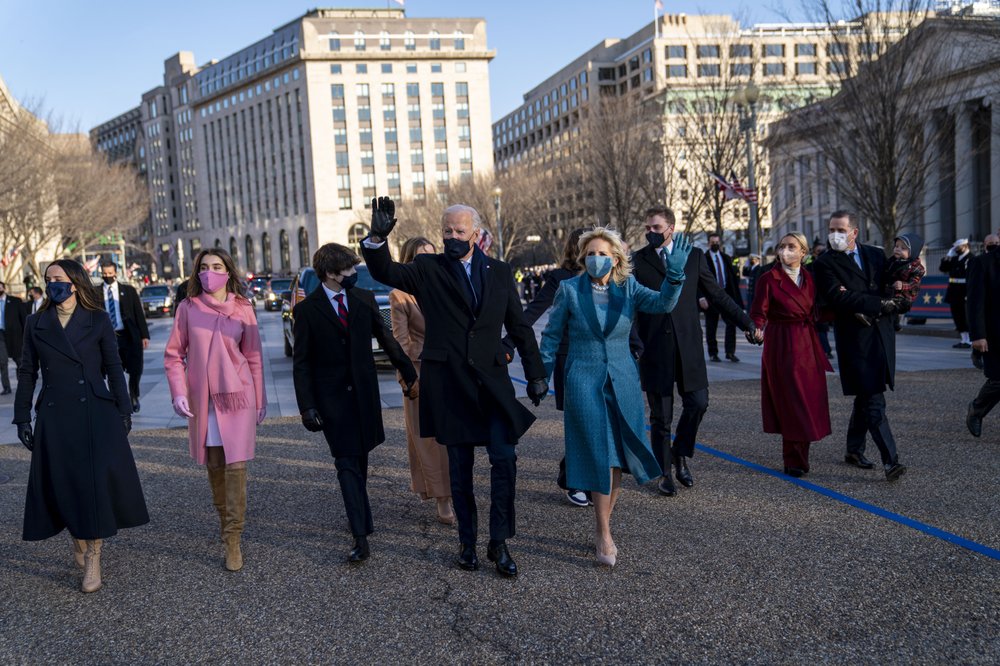 The Bidens walk near the White House during a presidential escort Wednesday. (Doug Mills/The New York Times via AP, Pool)

“I feel so hopeful, so thankful,” said Karen Jennings Crooms, a D.C. resident who hoped to catch a glimpse of the presidential motorcade on Pennsylvania Avenue with her husband. “It makes us sad that this is where we are but hopeful that democracy will win out in the end. That’s what I’m focusing on.”

Trump was the first president in more than a century to skip the inauguration of his successor. After a brief farewell celebration at nearby Joint Base Andrews, he boarded Air Force One for the final time as president.

“I will always fight for you. I will be watching. I will be listening and I will tell you that the future of this country has never been better,” said Trump. He wished the incoming administration well but never mentioned Biden’s name.

Trump did adhere to one tradition and left a personal note for Biden in the Oval Office. Biden would only tell reporters that it was “a very generous letter.”

Trump, in his farewell video remarks, hinted at a political return, saying “we will be back in some form.” Without question, he will shadow Biden’s first days in office.

Trump’s second impeachment trial could start as early as this week. That will test the ability of the Senate, now coming under Democratic control, to balance impeachment proceedings with confirmation hearings and votes on Biden’s Cabinet choices.