JOHANNESBURG, July 13 (Reuters) - Crowds clashed with police and ransacked or set ablaze shopping malls in cities across South Africa on Tuesday, with dozens of people reported killed, as grievances unleashed by the jailing of ex-president Jacob Zuma boiled over into the worst violence in years.

Protests that followed Zuma's arrest last week for failing to appear at a corruption inquiry have widened into looting and an outpouring of general anger over the hardship and inequality that persist 27 years after the end of apartheid.

Poverty has been exacerbated by severe social and economic restrictions aimed at blocking the spread of COVID-19.

Security officials said the government was working to halt the spread of the violence and looting, which has spread from Zuma's home in KwaZulu-Natal (KZN) province to the country's biggest city Johannesburg and surrounding Gauteng province, and to the Indian Ocean port city of Durban.

The South African Police Service (SAPS) said late Tuesday that as many as 72 people have lost their lives and 1,234 people have been arrested in the last few days of protests which have now turned into rampant looting and riots.

There have been reports of sporadic violence in two others provinces as well and "law enforcement officers patrolling identified areas of threat in an effort to deter possible opportunistic criminality," SAPS said.

Soldiers have been sent onto the streets to try to contain the unrest.

Zuma, 79, was sentenced last month for defying a constitutional court order to give evidence at an inquiry investigating high-level corruption during his nine years in office until 2018.

He also faces trial in a separate case on charges including corruption, fraud, racketeering and money laundering. He pleaded not guilty in court in May.

Zuma's foundation said there would be no peace in South Africa until the former president was released from jail.

"Peace and stability in South Africa is directly linked to the release of President Zuma with immediate effect," it said in a Tweet.

"The violence could have been avoided. It started with the decision of the constitutional court to detain president Zuma ... This is what gave anger to the people," a spokesman for the foundation, Mzwanele Manyi, told Reuters separately.

Troops moved into flashpoints on Tuesday as outnumbered police seemed helpless to stop the unrest, with columns of armoured personnel carriers rolling down highways.

The bodies of 10 people were found on Monday evening after a stampede at a Soweto shopping mall, Gauteng premier David Makhura said.

Hundreds of looters raided warehouses and supermarkets in Durban, one of the busiest shipping terminals on the African continent and an import-export hub.

Outside a Durban warehouse of retailer Game, looters stuffed cars with electronic goods and clothes, a Reuters witness said. Inside, the floor was a mess of discarded packaging as the crowd emptied the shelves. 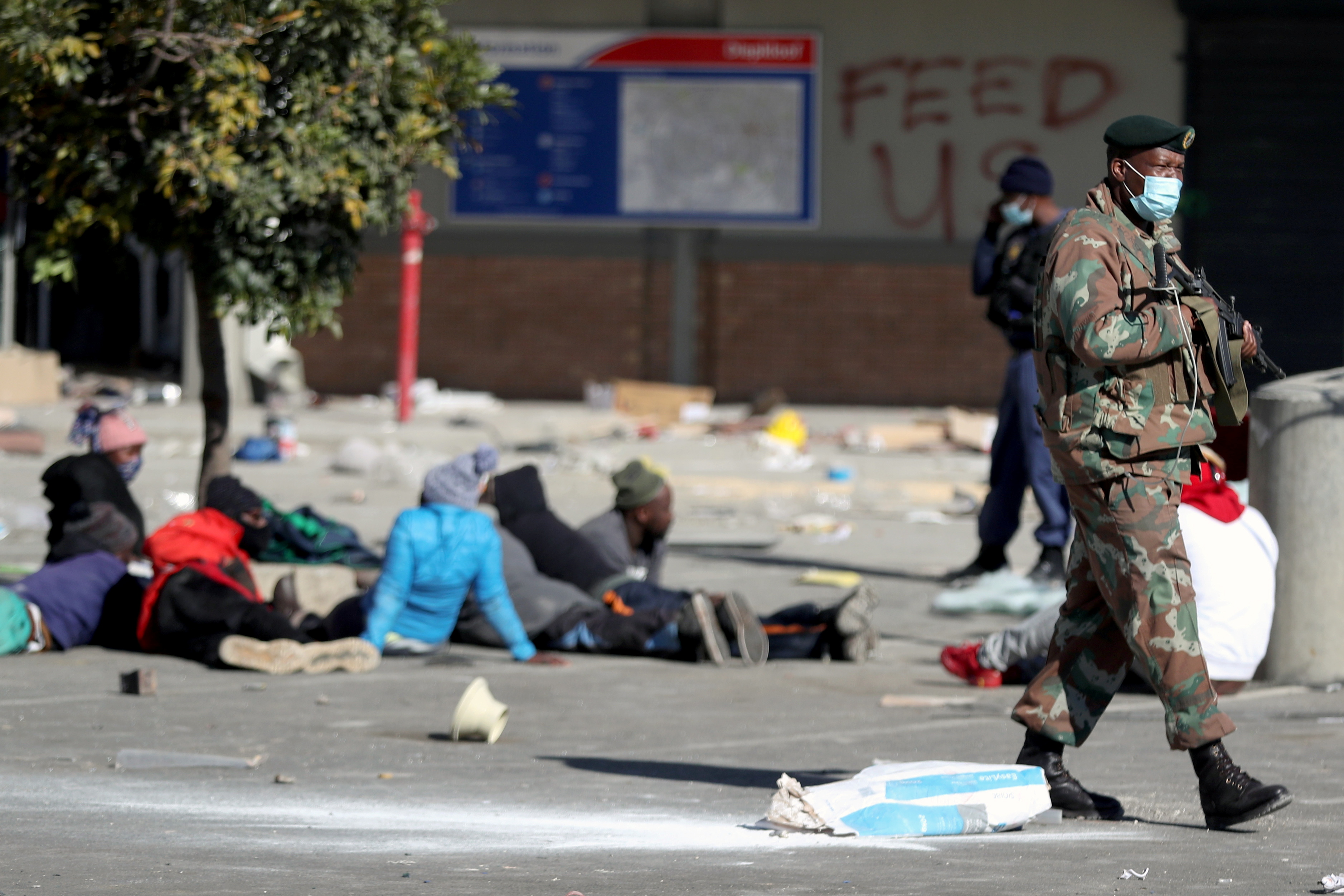 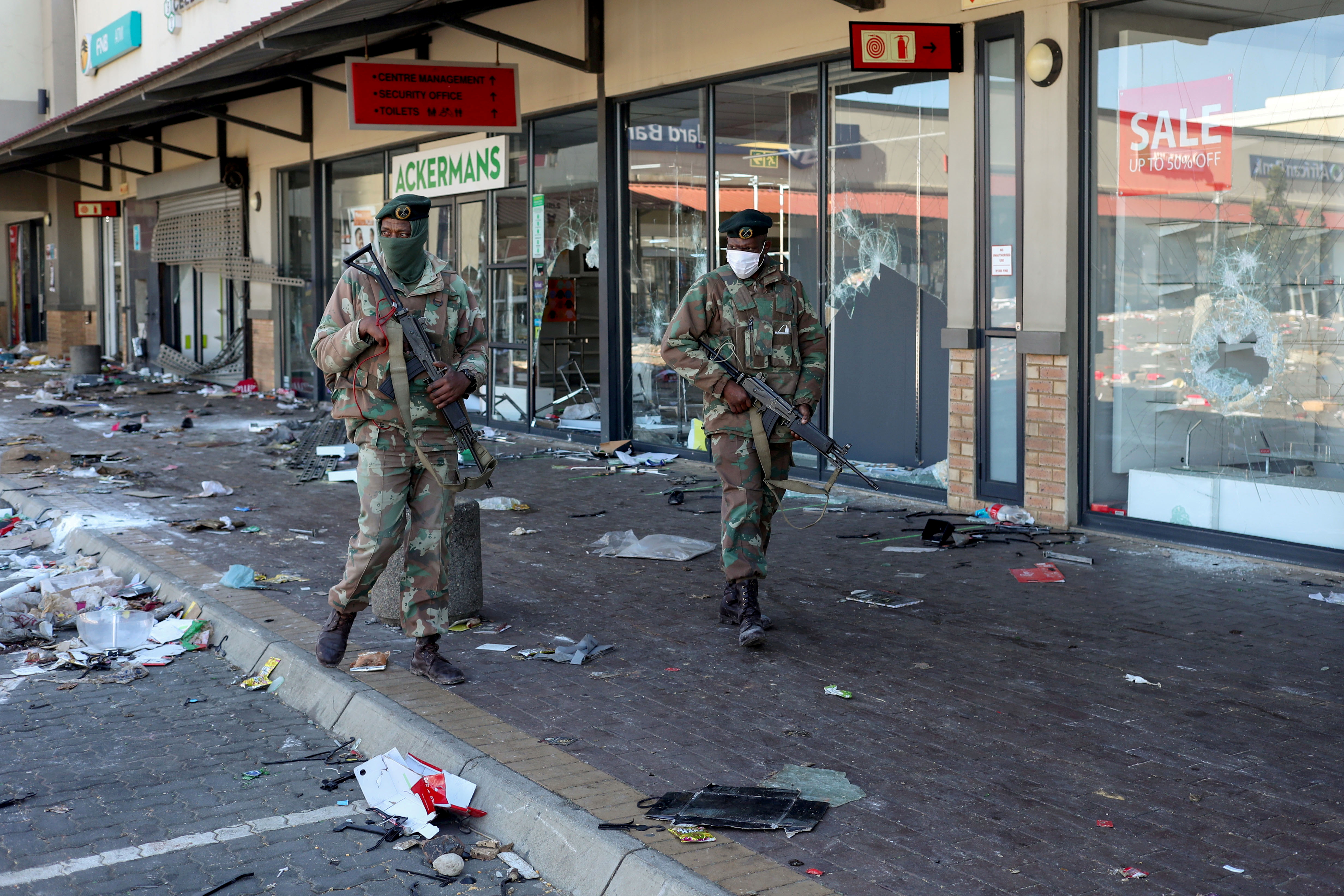 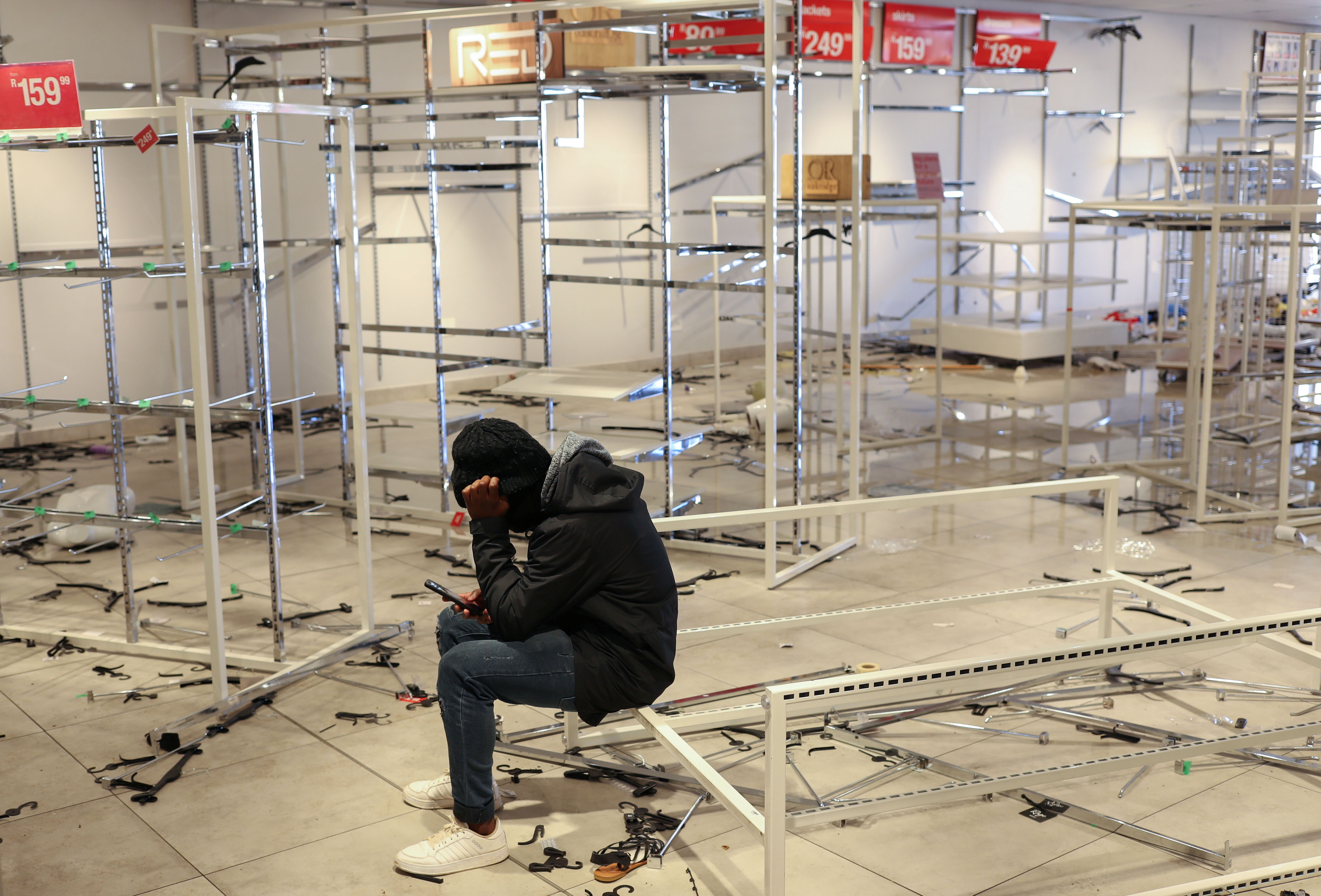 Members of the military patrol past looted shops as the country deploys army to quell unrest linked to jailing of former President Jacob Zuma, in Soweto, South Africa, July 13, 2021. REUTERS/Siphiwe Sibeko TPX IMAGES OF THE DAY

The rand , which had been one of the best performing emerging market currencies during the pandemic, dropped to a three-month low on Tuesday, and local and hard currency bonds suffered.

Shares of banks, real estate companies and retail firms that are largely dependent on the performance and outlook of the local economy also tanked on Tuesday.

Shops and petrol stations have been forced to close while on the streets protesters have hurled stones and police responded with rubber bullets, Reuters journalists said.

A clothing factory providing 600 jobs in Isithebe, north of Durban, would be forced to close as all its machinery and materials had been looted, a textiles union said.

"No amount of unhappiness or personal circumstances from our people gives the right to anyone to loot," Police Minister Bheki Cele said, echoing sentiments expressed by President Cyril Ramaphosa overnight.

However, Defence Minister Nosiviwe Mapisa-Nqakula, speaking at the same news conference, said she did not think a state of emergency should be imposed yet.

The legal proceedings against Zuma have been seen as a test of post-apartheid South Africa's ability to enforce the rule of law.

But any confrontation with soldiers risks fuelling charges by Zuma and his supporters that they are victims of a politically motivated crackdown by his successor, Ramaphosa.

The violence worsened as Zuma challenged his 15-month jail term in South Africa's top court on Monday. Judgment was reserved until an unspecified date.

The deteriorating situation pointed to wider problems and unfulfilled expectations that followed the end of white minority rule in 1994 and the election of Nelson Mandela in South Africa's first free and democratic vote.

The economy is struggling to emerge from the damage wrought by Africa's worst COVID-19 epidemic, with authorities repeatedly imposing restrictions on businesses.

Growing joblessness has left people ever more desperate. Unemployment stood at a new record high of 32.6% in the first three months of 2021.

The health department meanwhile said it had been forced to temporarily close some vaccination sites affected by the unrest, which had disrupted the rollout of COVID-19 vaccines.

Essential healthcare services like the collection of chronic medication by tuberculosis, HIV and diabetes patients were also affected by the violence.

An official, who declined to be named, said a government target to vaccinate 200,000 people on Monday fell short by 54,000 shots, mostly owing to disruption from the violence.