Alcohol may inhibit the body's ability to process certain medications properly, leading to increased and worse side effects or an overdose from their medications. The article below provides information on alcohol, how it affects the efficacy of medication, and what medicines should not interact with alcoholic beverages.

Why alcohol and medicine should not mix?

Alcohol, or ethyl alcohol, results from fermentation when yeast act on sugars in a liquid-like fruit juice. This process releases carbon dioxide and water into the mixture while creating ethanol as a byproduct. The ethanol then becomes alcohol (ethanol's chemical name).

Alcohol is a depressant, which means it slows down the brain and body functions. Medicine and alcohol interaction works in both ways: the beverage can alter the way a prescription functions, and some medicines might alter how alcohol affects the body.

By interfering with how drugs are absorbed in the digestive tract, alcohol can make some drugs less effective. In addition, in rare situations, alcohol improves a drug's bioavailability, causing the medication's concentration in the blood to rise to hazardous levels, leading to overdosage. 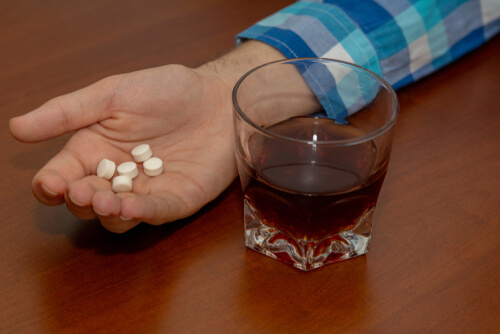 What medicines should never interact with alcohol?

When alcohol is consumed, the liver's ability to break down other substances like antibiotics is impaired. This can lead to antibiotic resistance and more severe side effects when taking this medication.  Metronidazole and Tinidazole, for example, can produce significant adverse effects such as nausea, vomiting, skin flushing, increased heart rate, dizziness, or sleepiness by interfering with the metabolism of alcohol.

Small quantities of alcohol combined with over-the-counter pain relievers like paracetamol and ibuprofen are unlikely to create any difficulties. On the other hand, alcohol should be avoided when using prescription medicines like tramadol, gabapentin, or codeine. When these drugs are used with alcohol, the risk of sleepiness and other adverse effects, such as nausea, increases.

Meloxicam is a nonsteroidal anti-inflammatory medicine that is used to treat pain and inflammation in rheumatic disorders and osteoarthritis, among other things. However, taking meloxicam and alcohol can cause gastrointestinal blood loss and liver damage and lead to a higher risk of developing a stomach ulcer.

Drinking can negate the effects of antidepressant medication, making it more challenging to address the symptoms. Antidepressants with alcohol have a more significant effect on judgment, coordination, motor abilities, and response speed than alcohol alone. Some combinations may induce sleepiness. This might make it difficult for the person to perform duties that need concentration and coordination.

Both alcohol and sedatives act as central nervous system depressants in the brain and body. This means they reduce body temperature while also slowing down critical vital and life-sustaining systems, including blood pressure, breathing, and heart rate. Mixing sedatives such as Valium (diazepam), Xanax (alprazolam), Klonopin (clonazepam), and Ativan (lorazepam) with alcohol can double up the effects, leading to fatal conditions.

Medical professionals recommend that alcohol and medicine should never be mixed. Mixing these two substances can lead to worse side effects, leading to fatal conditions such as alcoholic hepatitis or cirrhosis of the liver. This is because consuming both at once results in more toxins in the body, affecting regulation by the liver producing bile acid for digestion purposes.

In order to avoid any potential risks with mixing alcohol and medication, medical experts advise against drinking while taking a prescription drug - especially if it is uncertain what type of reaction may occur from this combination.